Nonthermal fixed points of far-from-equilibrium dynamics of a dilute degenerate Bose gas are analysed in two and three spatial dimensions. For such systems, universal power-law distributions, previously found within a nonperturbative quantum-field theoretic approach, are shown to be related to vortical dynamics and superfluid turbulence. The results imply an interpretation of the momentum scaling at the nonthermal fixed points in terms of independent vortex excitations of the superfluid. Long-wavelength acoustic excitations on the top of these are found to follow a non-thermal power law. The results shed light on fundamental aspects of superfluid turbulence and have strong potential implications for related phenomena studied, e.g., in early-universe inflation or quark-gluon plasma dynamics.

Nonthermal fixed points of the dynamics of a dilute degenerate Bose gas far from thermal equilibrium are analyzed in two and three spatial dimensions. Universal power-law distributions, previously found within a nonperturbative quantum-field theoretical approach and recently shown to be related to vortical dynamics and superfluid turbulence [Phys. Rev. B 84, 020506(R) (2011)], are studied in detail. The results imply an interpretation of the scaling behavior in terms of independent vortex excitations of the superfluid and show that the statistics of topological excitations can be described in the framework of wave turbulence. The particular scaling exponents observed in the single-particle momentum distributions are found to be consistent with irreversibility as well as conservation laws obeyed by the wave interactions. Moreover, long-wavelength acoustic excitations of the vortex-bearing condensate, driven by vortex annihilations, are found to follow a nonthermal power law. Considering vortex correlations in a statistical model, the long-time departure from the nonthermal fixed point is related to vortex-antivortex pairing. The studied nonthermal fixed points are accessible in cold-gas experiments. The results shed light on fundamental aspects of superfluid turbulence and have strong potential implications for related phenomena, for example, in early universe inflation or quark-gluon plasma dynamics.

Critical dynamics of an ultracold Bose gas far from equilibrium is studied in two spatial dimensions. Superfluid turbulence is created by quenching the equilibrium state close to zero temperature. Instead of immediately rethermalizing, the system approaches a meta-stable transient state, characterized as a nonthermal fixed point. A focus is set on the vortex density and vortex-antivortex correlations which characterize the evolution towards the nonthermal fixed point and the departure to final (quasi-)condensation. Two distinct power-law regimes in the vortex-density decay are found and discussed in terms of a vortex unbinding process and a kinetic description of vortex scattering. A possible relation to decaying turbulence in classical fluids is pointed out. By comparing the results to equilibrium studies of a two-dimensional Bose gas, an intuitive understanding of the location of the nonthermal fixed point in a reduced phase space is developed.

Videos: Critical dynamics of two- and three-dimensional superfluids near a nonthermal fixed point

The videos below show the approach of a single-component 2D (3D) Bose gas towards a non-thermal fixed point. The idea is to prepare the system in a state far from thermal equilibrium. The properties of this initial state are depicted in following Figure. The subsequent evolution then quickly leads to a kind of turbulent dynamics exhibiting the proliferated creation and propagation of quantized vortices (vortex lines in 3D). During this latter stage of the evolution the statistical properties of the system become universal. This universality is exhibited by the unique shape and temporal dependence of the particle number distribution across the different possible momenta (= wave numbers k and thus energies ω(k)) shown in the right panels of the respective videos. This includes different power-law distributions in the regime of low and large momenta, as well as a power-law change in time (see the "Anomalous NTFP" project). A more detailed description of the videos' content is given further below. 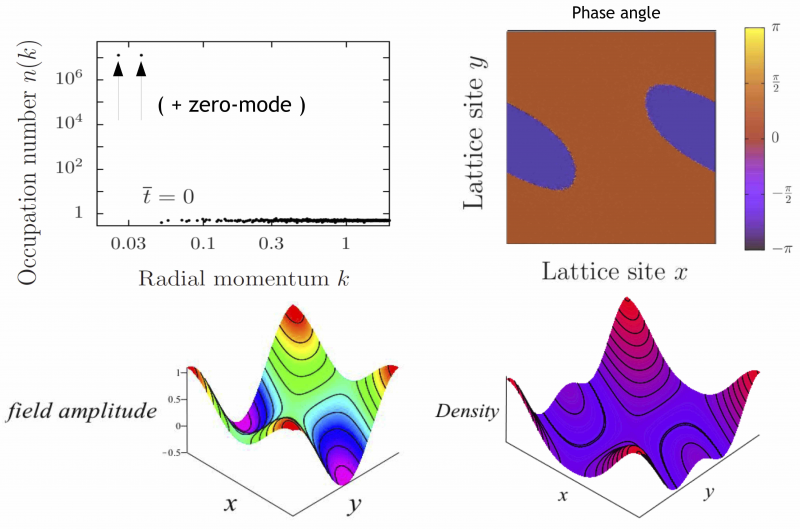 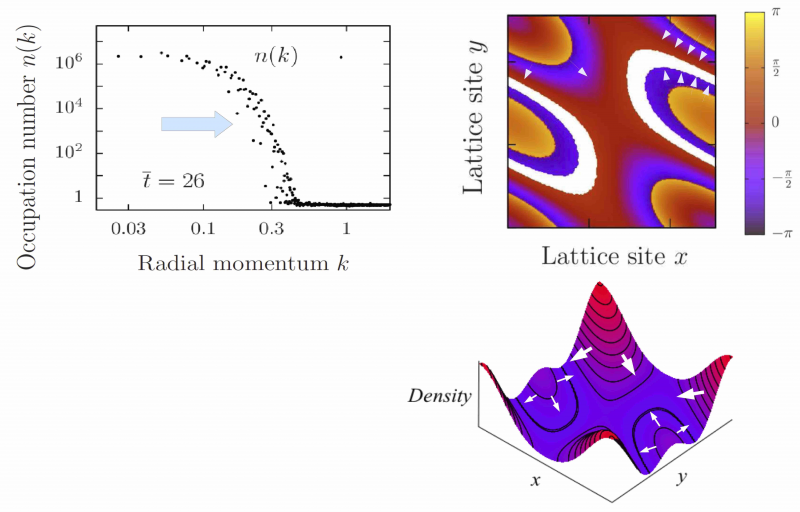 Figure 1: (left) The initial state chosen in the simulations shown in the videos below: A few momentum modes are occupied equally in the two spatial dimensions such that the Bose wave function initially assumes the sine-wave form shown in the lower left panel. The lower right panel shows the corresponding 2D density of the Bose gas, the upper right panel the phase of the wave function. In the red area it is 0 (positive real function) while in the blue areas it is π (negative real-valued function).

(right) Early-time evolution: The density maxima start to broaden and develop shock-wave fronts as the expansion speed reaches the speed of sound. The expansion is seen as phase gradients in the upper right panel (left panels in the videos) while the upper left panel shows the redistribution of momentum occupancies, quickly filling up the modes roughly equally, up to maximum momentum where the distribution falls off steeply.

Video 1: The left panel shows the phase θ = arg(φ) of the Bose field φ(x,y), color-encoded from 0 to 2π, with vortices and anti-vortices marked as white crosses and symbols, respectively. In the initial state, the field is purely real and given by a sum of sine waves with different momenta in different directions such that the line of zeroes of the field forms the two lobes seen in the initial frame. Periodic b.c. are imposed. During the subsequent evolution the density maxima initially positioned in the four corners flattens out, leading to inward flows with velocities v = grad θ increasing as can be inferred from the strong gradients of the phase developing towards the center of the square. At some point, the velocities exceed the speed of sound which leads to the proliferate creation of vortices and antivortices. These defects decay again by mutual annihilation during the long-time evolution which leads to the universal scaling behaviour in the approach of the fixed point. The right panel shows the occupation-number distribution n(k,t) = <φ+(k)φ(k)>t during the evolution seen in the left panel. At late times the distribution develops a power-law behaviour n(k) ~ k-4 at the lower k which reflects the r -1 dependence of the velocity v(r) at a distance r from one of the randomly distributed vortices. There is an IR cutoff below which this power law flattens out which moves algebraically in time to smaller momenta, see the above papers for details.

Video 2: While the right panel shows again the occupation-number distribution n(k,t) = <φ+(k)φ(k)>t during the evolution seen in the left panel (starting at a small non-zero time step), the left panel indicates the position of the vortices and antivortices (in red and blue color, respectively).

Video 3: Similar evolution towards a nonthermal fixed point as above but now for a 3D system with periodic boundary conditions. The left panel shows the points where the density of the gas falls to a few percent of the bulk density ρ = |φ|2. The initial state is similar to the one in 3D, with density maxima in the 8 corners of the box with p.b.c. The occupation number develops a k-d-2 = k-5 power law at late times, for the same reasons as in 2D. 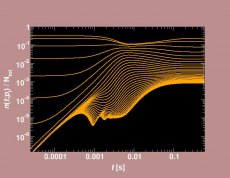