The Kirchhoff Institute for Physics (KIP) is named after a prominent physicist of the 19th Century: Gustav Robert Kirchhoff, who worked in Heidelberg for 21 years. His well-known lectures on experimental and theoretical physics attracted many students. Kirchhoff's ground-breaking research was extraordinarily diverse, spanning electrical, magnetic, optical, elastic, hydrodynamic and thermal processes. His laws for electrical circuits are well-known. At the time he was in Heidelberg, in conjunction with Robert Wilhelm Bunsen, he discovered spectral analysis and its application to solar radiation. In this way, Kirchhoff laid the foundation for modern astrophysics, as well as formulating the laws of thermal radiation, which played a key role in the discovery of quantum physics. The KIP aims to continue in this tradition of diverse scientific research and education. 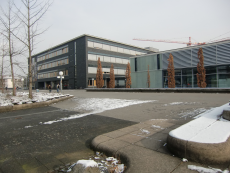