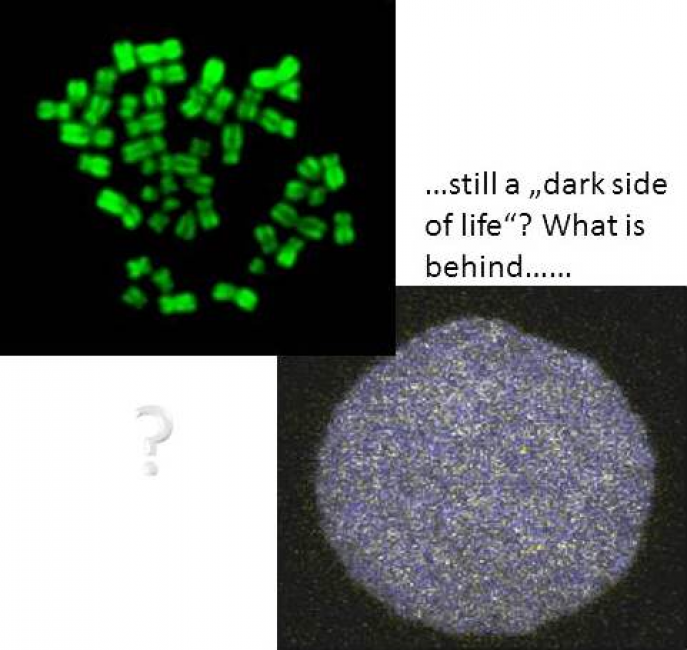 In cellular systems the main data storage for various functions is the cell nucleus containing the DNA. Beyond the sequence of DNA molecules, the three dimensional spatial organization of the micro- and nano-architecture plays an important role for the control of the complex system cell. In addition, in sequence data characteristic patterns can be found which lead to the expectation that the organization may not be random. These patterns are well conserved along phylogenetic lines during evolution.

Cellular data stored in the nucleus induce complex functional cascades and regulatory cycles of cellular proteins. These functional cycles are often displayed on the cellular membrane by appropriate signal molecules which allows cellular systems to communicate with their natural environment. Genes and nucleotide sequences in the nucleus and proteins and receptors on the membrane can be understood as corresponding endpoints of complex functional cascades of a cellular system. Molecular-chemically or physically triggered modification on one or the other side are resulting in spatial re-arrangements and compaction changes of DNA or receptors and proteins, respectively. The dynamics and charaxteristics can be investigated with novel techniques of super-resolution microscopy and nano-labelling.

The research group "€œExperimental Biophysics" is working on questions of the organization of bio-molecules and sub-cellular units in cellular systems considering biomedical applications and medical diagnostics. By means of fluorescence microscopy and super-resolution microscopy basic research as well as applied research is done in the field of radiation-biophysics and tumour medicine.

For the investigation of different kinds of information being contained by the cell nucleus chromatin, DNA data bases are analyzed and compared for specific pattern formations. Based on these analyses fundamental results for the chromatin organization can be obtained and also sequences for the design of specific oligonucleotide nano-probes for for microscopy are determined.

Such molecular labelling techniques allow the investigation of structures and organization principles in 3D-conserved cell nuclei. Cells are not only exposed to externeal stimuli like ionizing radiation, molecular ligands or therapeutic antibodies but also to special geometric physical boundary conditions which allow to mimic tissue equivalent cell ensembles.

Research on intrisic information being archived and processed in cells results in priciple investigations of organization and use of archives in a broader sense as being discussed interdiciplinarily between sciences and humanities.

Beyond this research and based on theoretical considerations, conditions are studied being relevant for the development of molecular pre-requisits which may be possible for life also under extreme conditions.

The research is supported by: