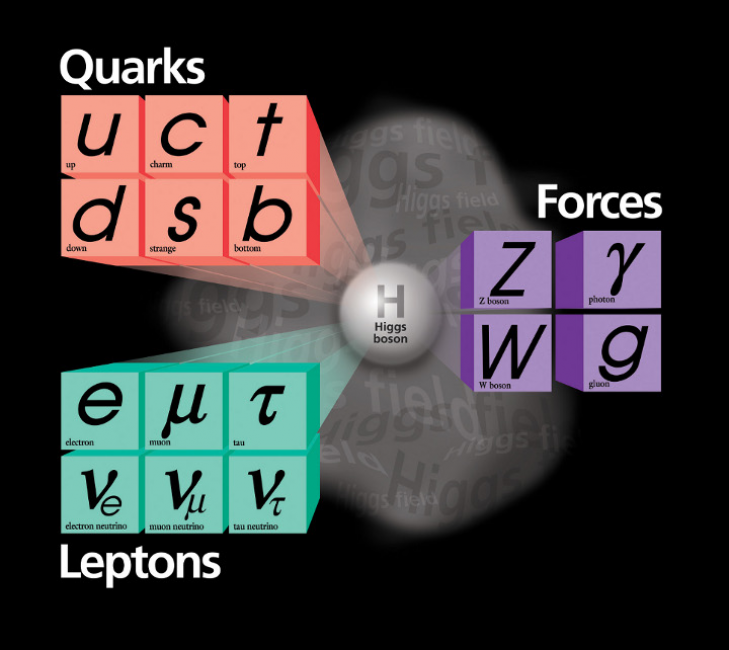 The Standard Model (SM) is a theory describing fundamental particles and the interaction between them. These fundamental particles are all fermions, having spin 1/2, and are grouped into three so called generations. There are nine quarks, which have a charge of either -1/3 or 2/3 and nine leptons, which consist of three massive leptons, the electron, the muon and the tau and their respective neutrinos. The force carriers called the gauge bosons, all have spin 1. The massless photon is the mediator of the electromagnetic force, the massless gluon is the mediator of the strong force and the massive W+- and Z bosons are the mediators of the weak force.  Latest results from ATLAS and CMS prove the existence of a Standard Model Higgs boson, a scalar boson with spin 0, which give mass to the fermions and the gauge bosons.

The production of three gauge bosons of the electroweak interaction is a process described by the Standard Model of particle physics with a relatively small cross section. The Run-2 dataset of the ATLAS detector offers the unique opportunity to measure and validate such processes. This analysis focuses on the differential cross section measurement of the simultaneous production of a Z boson and two photons (Zyy). Among the features of this analysis is the suppression of so-called final state radiation, in which the photons are emitted by one of the charged leptons of the Z boson decay. Additionally, the Zyy production offers sensitivity for anomalous quartic gauge coupling. The direct coupling of two Z bosons and 2 photons, i.e. the ZZyy vertex, is forbidden in the Standard Model of particle physics.  However, it could occur through New Physics, which could then modify the cross section of the Zyy production.

A precision measurement of the production of a W boson in assiciation with jets (W+jets) is not only a powerful test of perturbative quantumchromodynamic (QCD) but also an important measurement for new physics searches where W+jets events are a major background. Understanding W+jets production in multiple regions of phase space, such as events with high jet momenta or large scalar sum pT has become an important test of next-to-leading order calculations and tree-level Matrix Element generators. Measuring the cross section in multiple differential distributions like jet momenta, the angular properties of the jets, the scalar sum pT and the jet multiplicity is an extensive test of the Monte Carlo generator which are used heavily for background estimates in new physics searches. Due to lack of statistics in the data, these generators so far have only been tested at moderate jet energies and jet multiplicities, using proton-antiproton collisions at the Tevatron and in the first data sets at the LHC.

We focused on several measurements of W+jets at 7 and 8 center of mass energies. The goal of these publications is to probe extreme phase spaces (i.e. events with large jet momenta or large scale sum pT). These are areas where the Standard Model itself is least understood and with the large data sets from the LHC can be measured for the time. The publication of this work can be found here.

Final states with three vector boson are rare processes. The signature comprising one W boson and two photons was among the first triboson final states to be detected by ATLAS. The extraction of the cross section was unprecedented as it is so small, that it couldn't be measured by previous experiments. A very attractive feature of studying the Wyy final state is, that it is sensitive to the so-called quartic gauge couplings, describing a four vector boson interaction. This is due to the fact that the process pp -> Wyy comprises four boson vertices. The gauge couplings are precicely described by the Standard Model of particle physics and a deviation from these predictions would hint to new phenomena aside from the to date established theory. Publication of this work can be found here.