The Search for New Physics 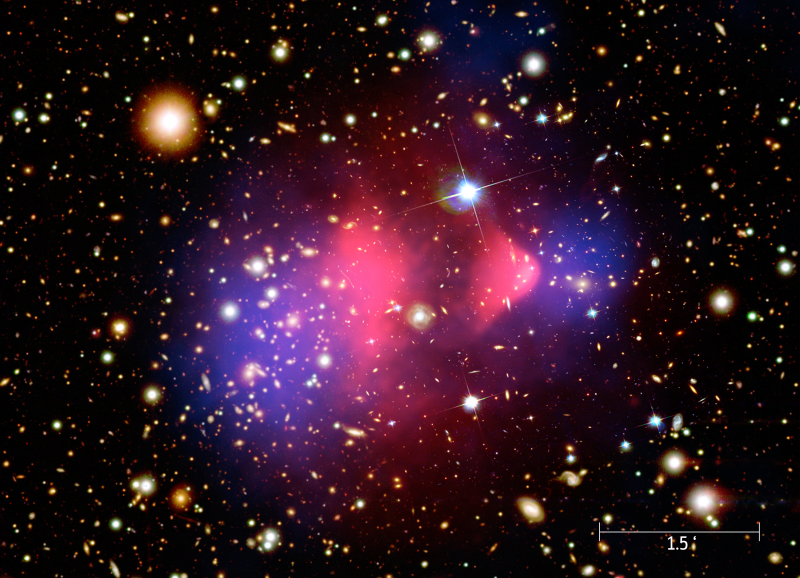 Questions like these motivate us to search beyond the Standard Model in order to seek answers. With the high energies and luminosities of the Large Hadron Collider (LHC), we can potentially produce new particles and study them in great depth.

Any potential new particle that can be created in proton-proton-collisions at the LHC must also be able to decay back into hadronic states – typically into two hadronic jets. Searching for resonances in the dijet mass spectrum proves challenging as QCD dijet events are the most abundant process at the LHC. The ATLAS trigger-level analysis studies these events with reduced detector readout allowing to bypass the high energy thresholds of the jet trigger. Estimating the contribution from Standard Model jet processes is especially challenging for this large data sample. In our group we are currently developing new stategies to estimate these background processes.Results using this trigger-level approach using a smaller sub-set of data can be found here.

A powerful signature for DM production at the large hadron collider is large missing transverse energy (MET) from the dark mattter particles in association with one or more energetic jets. A Standard Model (SM) process with identical event topology is the Z boson decaying to neutrinos (Z→ νν (+jets)).  A measurement of this process is performed for events with energetic jets and MET as well events which are selected to enhance vector-boson fusion processes. To simplify later comparisons of the measurement with models for physics beyond the SM, detector effects are removed from the data using an iterative unfolding procedure. Experimental and theoretical uncertainties are constrained using a set of control regions. These control regions are based on different boson-mediated processes, which ensures a high degree of correlation of the uncertainties between the different regions. A search for deviations from the SM is then performed on the detector-corrected results.   Previous results based on a small data sample can be found here.

Our world can have more than three space dimensions. Additional, so far unseen, dimensions can appear at very small distances, if they are 'compactified'. In this case, the well-known Newton's gravity law would change at these small distances: instead of 1/r2 the dependence of the gravity force on the distance r would be 1/r2+n for the number of additional dimensions n. Then the gravity would rise much steeper towards smaller distances and eventually could reach the strength of the other fundamental interactions even at the TeV scale, thus making a unification of all four interactions possible. A strong gravity would create a number of interesting signals at the LHC, such real graviton production or virtual graviton exchange. A real graviton would escape into the extra dimensions, while we would observe just a single hadronic jet and a huge missing energy. Another spectacular effect would be the production of microscopic black holes. They would decay instantly via the Hawking radiation, and we would observe events with many particles of very high energies in the ATLAS detector.

In order to identify microscopic black holes in the detector, one must define criteria to decide which signature is observed in every given event. Particularly, one must be able to distinguish between the microscopic black hole decay and known processes of the Standard Model (SM). At high energies, the SM background is dominated by the dijet production, mostly with additional multiple gluon radiation. In contrast, one expects the signature of the microscopic black hole decay to be as spherically symmetric as possible due to the democratic nature of the Hawking radiation. This difference in the event topology is exploited in the analysis which is mainly based on searching for events that show considerable difference from the dijet background. The background in the possible signal region is estimated with data-driven methods which are tested on simulated data. If no excess of events in the signal region can be found, an upper limit on the production cross-section of microscopic black holes is set, which furthermore implies limits on parameters of different models with extra dimensions.