The LHC is designed to collide bunches of about 1011 protons at a frequency of 40 MHz. This corresponds on average to 35 inelastic proton-proton collisions every 25 ns. The Level-1 trigger has to reduce the interaction rate of 40 MHz down to 100 kHz, by selecting those events which contain traces of interesting physics. Because of the limited size of the on-detector data buffers, a decision has to be taken at maximum 2.5 microseconds after each event takes place.

To perform this task, the Level-1 trigger searches for highly energetic particles in the calorimeters and the muon system of the ATLAS detector. It consists of three different subsystems. The Level-1 Calorimeter Trigger (L1Calo) analyzes the energy depositions in the calorimeters to find electrons, photons, taus and jets. It also computes global sums of total and missing energy. The Level-1 Muon Trigger (L1Muon) uses data from the muon spectrometers to locate muon candidates. The information from these two subsystems is combined in the Central Trigger Processor (CTP), which makes the final Level-1 trigger decision. Only events which contain particles that pass configurable energy- or momentum-thresholds are accepted.

Test of the Standard Model

The phase-I upgrade, for the Run-3 data taking period, of the ATLAS L1Calo trigger system introduces new subsystems for identification of isolated particles and jets, called feature extractors (FEXes). In order to provide digitized data from the Tile Calorimeter to the FEXes, via high speed optical links, the L1Calo PreProcessor subsystem is being extended with new Tile Rear Extension (TREX) modules.

Software and Calibrations with Phase-I system

Some new hardware updates are introduced by the Phase-I Upgrade for L1Calo, including new Layer Sum Boards (LSB) and digitizing the system via new boards like the LAr Trigger Digitizer Board (LTDB). With this improved hardware,  Run 2 analogue system, which is planned to run parallel to the upgraded system at the start of Run 3, will need to be recalibrated.

One of the main contributions of the KIP ATLAS group to the trigger system is the construction and operation of the L1Calo PreProcessor. During the running of the LHC, the KIP group was heavily involved in monitoring and maintaining the L1Calo system. This task includes the calibration of PPr parameters for energy determination, the optimization of the fine timing as well as the development of monitoring tools for the different variables.

After the LHC upgrade during the long shutdown, which ended in 2015, the number of particles colliding at the same time ('pile-up') increased and thus lead to harsher conditions for the trigger system. Therefore an upgraded replacement module for the MCM was developed, the 'new MCM' (nMCM). 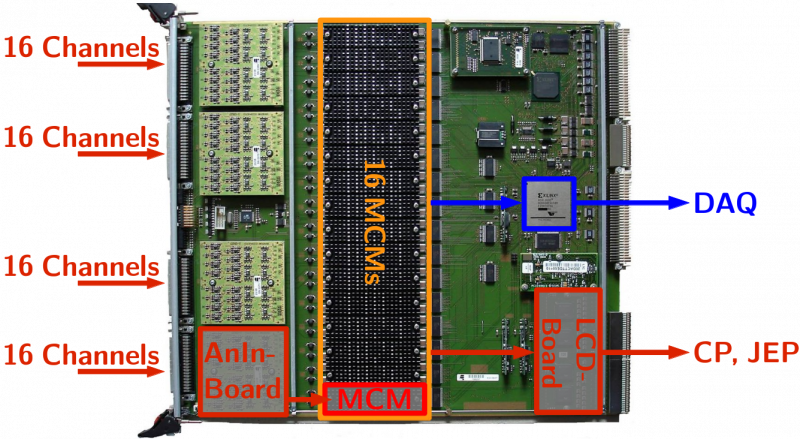 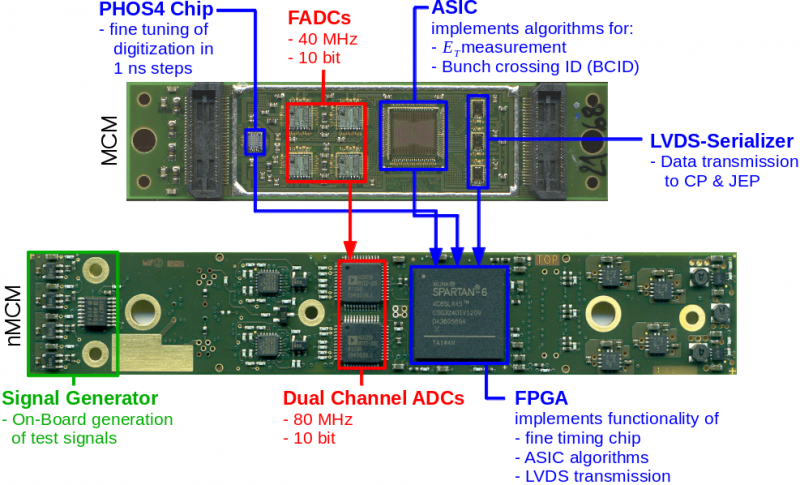