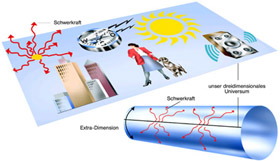 Our world can have more than three space dimensions. Additional, so far unseen, dimensions can appear at very small distances, if they are 'compactified'. In this case, the well-known Newton's gravity law would change at these small distances: instead of 1/r2 the dependence of the gravity force on the distance r would be 1/r2+n for the number of additional dimensions n. Then the gravity would rise much steeper towards smaller distances

and eventually could reach the strength of the other fundamental interactions even at the TeV scale, thus making a unification of all four interactions possible. A strong gravity would create a number of interesting signals at the LHC, such real graviton production or virtual graviton exchange. A real graviton would escape into the extra dimensions, while we would observe just a single hadronic jet and a huge missing energy. Another spectacular effect would be the production of microscopic black holes. They would decay instantly via the Hawking radiation, and we would observe events with many particles of very high energies in the ATLAS detector.

In order to identify microscopic black holes in the detector, one must define criteria to decide which signature is observed in every given event. Particularly, one must be able to distinguish between the microscopic black hole decay and known processes of the Standard Model (SM). At high energies, the SM background is dominated by the dijet production, mostly with additional multiple gluon radiation. In contrast, one expects the signature of the microscopic black hole decay to be as spherically symmetric as possible due to the democratic nature of the Hawking radiation. This difference in the event topology is exploited in the analysis which is mainly based on searching for events
that show considerable difference from the dijet background. The background in the possible signal region is estimated with data-driven methods which are tested on simulated data. If no excess of events in the signal region can be found, an upper limit on the production cross-section of microscopic black holes is set, which furthermore implies limits on parameters of different models with extra dimensions.

What we are working on
Simulated Blackhole Event